Fed in Focus – US Repo and Funds Rate

Fed in Focus – US Repo and Funds Rate

During the week, it was all about the Repo market. A Repurchase Agreement known as Repo is a form of short-term borrowing for dealers in government securities. The Repo market plays a key role in supporting liquidity in the financial markets. It facilitates the flow of cash and securities around the financial system which benefits both the financial and non-financial firms.

In simple words, the Repo market consists of one party lending out cash in exchange for an equivalent value of securities to another party. The Borrower will, therefore, pay a fee to the Lender. The securities being sold, which is often the Treasury notes are the collateral.

On Tuesday, the Repo rate soared to record levels above 8% which is more than four times the normal rate. Even though the money market experienced a significant outflow on Friday ahead of the tax deadline, the sharp increase stunned investors and created fears of the abrupt tightening of the US money markets. 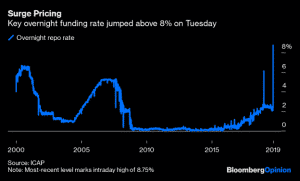 There was another alarming signal as the surge in the Repo rate caused the average funds rate to rise to the upper end of the Fed’s current target range. The Fed quickly intervened with a move it has not used in more than a decade and injected billions of dollars in the financial system to calm money markets.

The move succeeded in bringing some relief and allowed the Repo rate to drop. The Fed further reassured market participants that it is willing to spend another $75 billion on Wednesday. 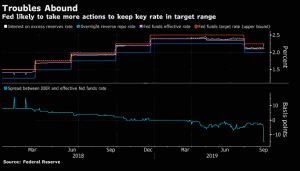 At a time where there are deep disagreements within the Federal Reserve over the path of interest rate outlook, the chaos in the repo markets complicated matters. Investors have priced-in a 25-basis point rate cut, but are uncertain about the future “dot plot”.

The manufacturing sector is slowing, and trade tensions continue to overshadow the financial markets. However, the consumer-orientated parts of the economy are holding up. Consumers remain one of the bright spots – Personal Consumption grew at a healthy pace in July. The employment sector also remains strong.

This meeting will help traders to gauge how policymakers are assessing the recent economic data and the trade tariffs developments. There have been some sorts of a rethink in the markets regarding further easing.

At this stage, the economic data does not fully justify the second-rate cut, but the Fed will likely proceed with the cut as insurance against slowing growth due to external factors rather than a slowing domestic economy.

Irrespective of how the Fed conveys its monetary outlook, the Fed is set to trigger high volatility!

Next: 2019 in a Nutshell and the Transition to a New Decade
Previous: ECB: Draghi’s Last Call for A Significant Degree of Monetary Stimulus