Britain has a new Prime Minister and as highly expected, Boris Johnson won the race over his opponent, Jeremy Hunt to become the new Tory leader. It was a convincing win despite the controversial headlines about Boris Johnson.

Sir Alan Duncan’s resignation came in the wake of Boris Johnson’s victory. He described Brexit as a “dark cloud” and wanted to free himself from his position as the Foreign Office minister to freely express his views on Brexit.

Anne Milton resigned as Skills and Apprenticeships minister citing “grave concerns about leaving the EU without a deal” after the election of Boris Johnson. She believed the “departure from the European Union should be centred around future cooperation”.

David Gauke, the UK Justice Secretary, swiftly resigned as the new leader was confirmed. He tweeted his congratulations to the new Prime Minister and mentioned that he looked “forward to returning to backbenches” to serve the people of South West Hertfordshire.

“Assuming that Boris Johnson becomes the next prime minister, I understand that his conditions for serving in his government would include accepting a no-deal exit [of the European Union] on the 31st of October, and it’s not something I could ever sign up to.”

Rory Stewart, the International Development Secretary also confirmed its intention to return to the backbench to serve Cumbria.

Markets will be on the Resignation Watch in the coming days to examine the extent of Boris Johnson becoming the new Prime Minister.

A new Prime Minister does not eliminate the uncertainties about Brexit, but the appointment of Boris Johnson amplifies the uncertainties. All in all, the reactions in the markets were largely priced-in. Rather than focusing on the economic policies and the potential investment opportunities that will come with the new leader, investors will likely continue to proceed with cautious as an orderly Brexit becomes more challenging than ever.

The US President was quick to refer to Boris Johnson as the “Britain Trump”. Will Britain Trump has a similar outcome on the stock market that President Trump had?

The new Prime Minister will likely increase Brexit uncertainties which will most probably push the FTSE 100 higher:

A look at the year-to-date chart shows that despite the ongoing Brexit drama and political chaos, the FTSE 100 traded higher since the beginning of the year. 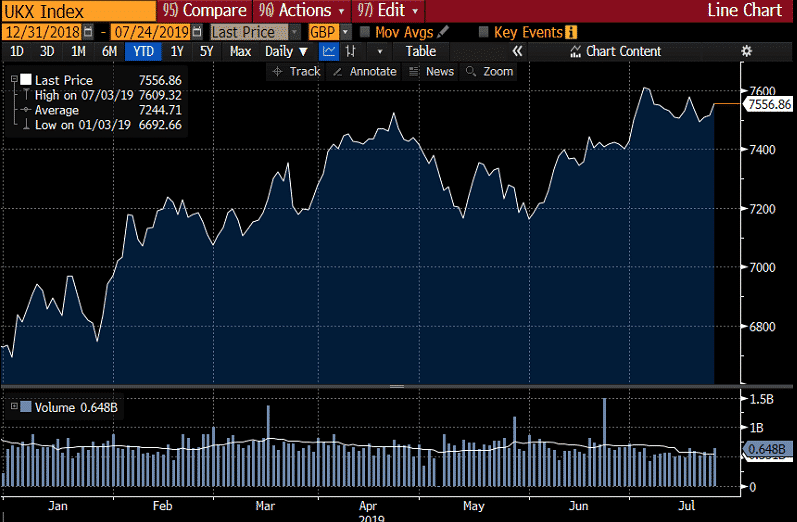 However, it is important to note that the UK stock discount to Europe, which is the greatest since 20116. 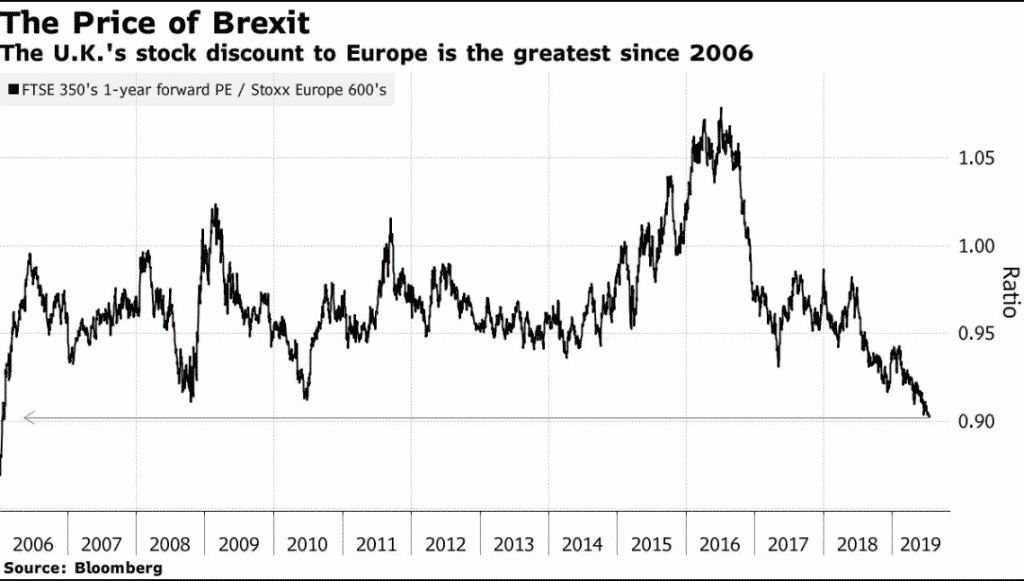 Brexit is the primary downside risk oscillating sentiment for the local currency. The British Pound was a source of Britain’s stability within the members of the European Union. Since the Brexit referendum, the local currency was unable to recover to the levels seen before the referendum. Last week, the Pound dropped to a two-year low to $1.24.

The GBPUSD is trapped in a downtrend. The new leader will have only a couple of months to try to secure a divorce deal, and from what we know, it will be challenging. The Pound could be sent lower as pressure over the negotiations increased. We could see the local currency dropping to the low levels seen post-Brexit.

Using the Point & Figure methodology, the chart below indicates just how weak the British Pound has fared compared to the Japanese Yen longer-term. Nothing highlights this weakness more than the bearish resistance line in red, which depicts a steady downtrend for a considerable length of time.

At one stage it appeared GBPJPY might be producing a change in direction as the pair began creeping up into the 144.00 regions. However, as soon as the pair looked sure to breakout above the trend, it nose-dived back towards the familiar bearish territory.

We also notice a bearish signal forming as supply slipped past the multi-triple bottom area of 1.3578. Downside targets are few and far between now with the psychological level of 130.00 potentially finding some demand, and a further decline closer to the previous significant support of 1.2566.

If Mr Johnson succeeds in his quest to re-ignite the UK economy, then we may see Pound Sterling appreciate quite considerably. Until such time, the triple top resistance level of 148.77 should keep demand in check. 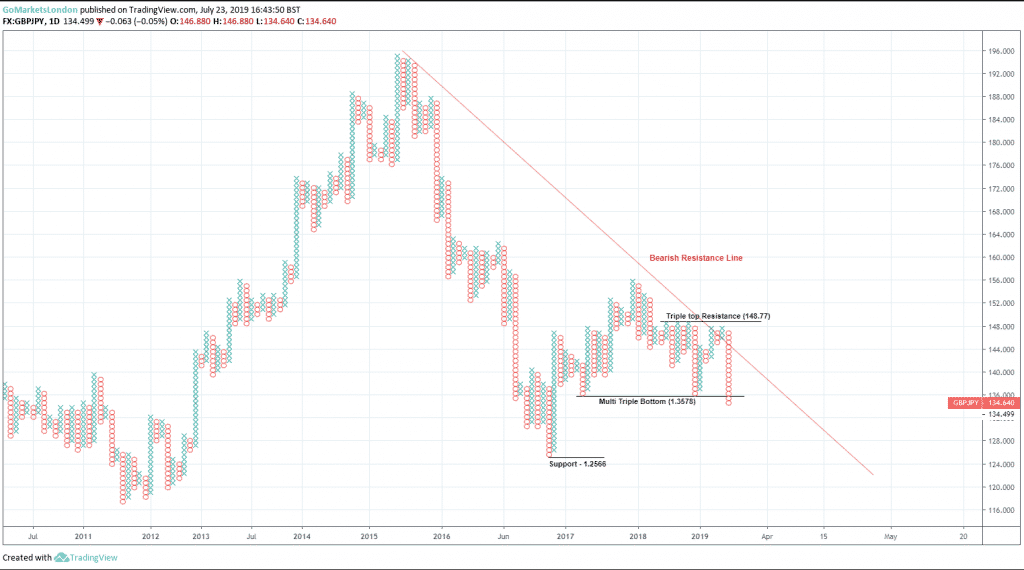 Next: Did China Retaliate with a Currency War?
Previous: Back-To-Back Interest Rate Cuts