2020 Kicks off with US-Iran and Climate Change Crisis

The start of the year was marred by the escalating tensions between the US and Iran while extreme weather conditions across the global triggered fierce debates about climate change.

What do we know so far about the tensions between Iran and the US?

As the world witnesses the rising tensions between the US and Iran, and a uniting Iran over the assassination of one of the most influential and powerful men, the downing of Ukraine International Airlines flight PS752 has caused international outrage and brought internal division within Iran.

The existential conflict between the US and Iran moved beyond an economic war. In 2019, the US announced further economic sanctions on Iran, which has put Iran into a deeper recession. As a significant buyer of crude from Iran, China sees the situation as an impediment that can hurt its economy. The Iran risks may, therefore, overshadow the trade deal.

Investors have already priced in some extent of the risks associated with Iran since President Trump pulled out of the 2015 nuclear deal and started to impose sanctions. Even though the headlines brought Iran back on the geopolitical risks radar and caused a spike in volatility, we do not see the conflict changing the investment landscape at this stage.

2020 is set to be the confirmation of a new era for climate change. As we entered a new decade, the extreme weather conditions around the world have forced leaders of many countries to reassess their actions over climate change and transform the global energy system.

In Australia, the unprecedented and raging bushfires across the country act as a warning to the world and has even challenged a reluctant Prime Minister to take more action

Oil prices experienced their largest weekly drop since July 2019 despite the tensions in the Middle East. Coincidently, markets were hit by two contradictory themes for the oil and gas industry: Iran Risks and Climate Change. 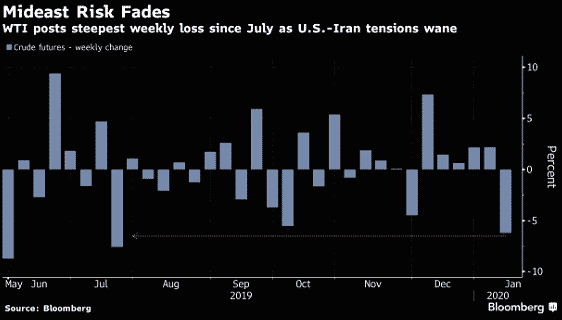 It should be highlighted that the energy sector emerged as the worst-performing sector of S&P500 in the last decade. Investors are stepping into 2020 being accustomed to the global oil glut and the gradual shift in the oil and gas industry.

Eyes are now on the US-China trade deal!

Despite an erratic few weeks of trading, global stock markets have performed quite well:

Brexit will remain the dominant factor for the UK markets. Despite the volatile year 2019, the FTSE100 posted two-digit gains. The Tory win had pushed the index above the 7,500 mark. Looking ahead, the Footsie is expected to rebound and investors are eyeing the next target at 8,000 level for 2020.

However, given that a large amount of earnings of the index is derived from overseas, an appreciation of the Sterling may hinder the performance of the FTSE100 to play catch up with its global peers. 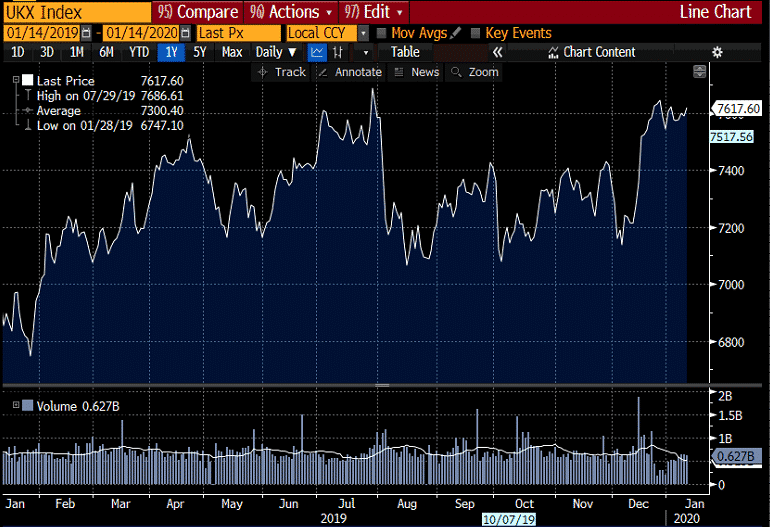 The killing of a key commander took the markets by surprise. Heightened geopolitical risks have somehow become the new normal and unless there is any serious escalation, medium to long-term effect on the markets would be limited. In a new world of higher tariffs, de-globalisation, and historic low levels of interest rates, the most significant risks for 2020 are:

Next: US Dollar and Gold in Tandem
Previous: 2019 in a Nutshell and the Transition to a New Decade