US Dollar and Gold in Tandem 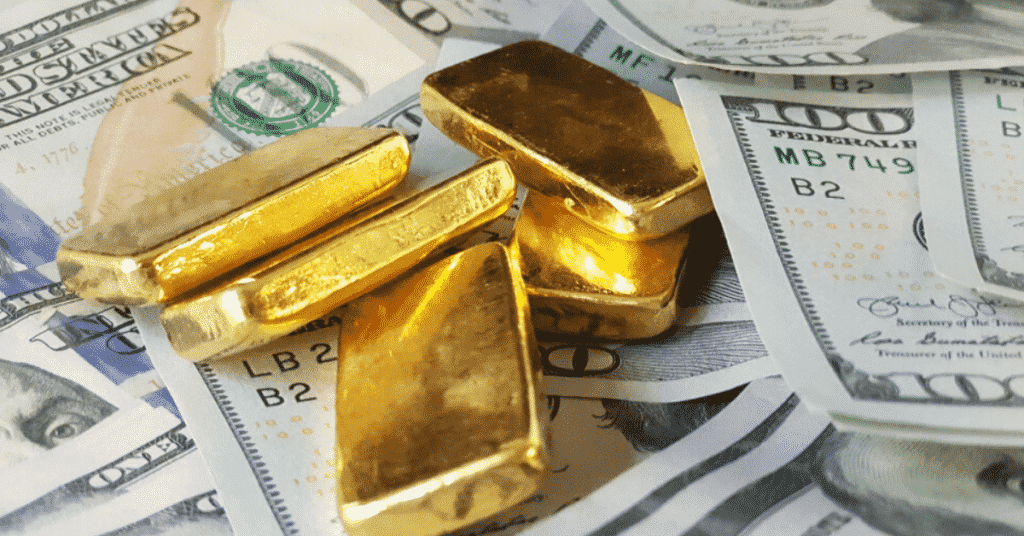 Which safe-haven to choose in 2020 – Gold or the Mighty Dollar?

In times of uncertainties – be it economical, political or policy-related, investors generally seek safety with haven assets like the US dollar, Japanese Yen, Swiss franc or Gold. Our attention today is on Gold and the US dollar, both of which have had an interesting start to the year so far.

Major equity indices reached fresh record highs in January. Yet, gold price remains in elevated levels around $1,550. It is a situation of “cautious” risk appetite.

The narrative is simple. Investors are still navigating in an environment with high levels of uncertainties, despite easing trade tensions and receding recession fears:

Major central banks are pumping money into the economy through quantitative easing and are reducing interest rates to stimulate the economy, hence driving demand for riskier assets. Hard assets like gold are therefore generally sought as investors are hedging against poor fundamentals and the long-term headwinds.

Currently, the fears that the Coronavirus may spread to more countries and dent economic growth are also boosting the short-term outlook for gold.

We are seeing a stronger US dollar but the greenback acting as a safe-haven will likely face some limitations. The Federal Reserve cut interest rates three times last year, mainly due to weaker global growth and trade tensions.

Lower rates and still a stronger US dollar?

The US dollar is gaining a competitive advantage over its peers in the currencies market. The US economy is stronger and the Fed is considered to be less-dovish than other central banks. While some might still need to reduce interest rate further in 2020, the Fed is expected to remain on pause with the expectations of being among the first central banks to be able to start hiking again in 2021.

Since the beginning of the year, instead of a negative correlation, both the US dollar Index which represents the performance of the greenback against a basket of currencies and the XAUUSD pair are moving in tandem.

An alignment which is unusual but occasionally occurs during periods of heightened geopolitical and economic risks. 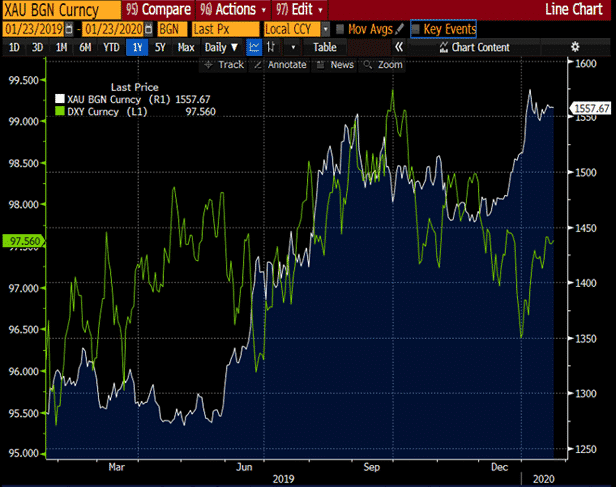 Quantitative easing is a controversial and unconventional monetary measure used by central banks to pump money into their economies. Recession fears and lack of inflation growth despite a decade of low- interest rate have forced central banks to reconsider QE in 2019.

As a result, QE is triggering a rally in gold.

At the same time, the US dollar is being favoured in the currencies market as it retains a positive interest rate differential with many countries. Overall, investors are looking for the next best alternative. The US economy is not shielded from the global headwinds, but are perceived as performing better in comparison to other major countries.

Is Gold a Better Safe-Haven?

As major economies engage in easing monetary policies, central banks are also piling up on gold. Emerging markets like China and Russia have also increased their gold reserves over concerns on currencies like the US dollar and Euro. Why? To diversify away from the US dollar?

A stock rally and a stronger dollar do not seem to have tamed the rise of gold. The stock rally is being driven by the QE process, easing trade tensions and receding recession fears, while the US dollar is being favoured over its peers.

However, we note that a partial trade deal and a global economy poised for a mini-recovery could limit the potential upside of the US dollar. The “by-default” strengthening of the US dollar could limit the effectiveness of the actions enacted by the Fed to shelter its economy from global headwinds. Also, the global growth narrative is dependent on China’s commitment to Phase One. Both are moving together, but the magnitude is different.

The current sentiment is positive yet fragile due to the uncertainties, which is creating a favourable environment for the precious metal.

Next: The Lockdown, the Fallout and the Roadmap to Recovery
Previous: 2020 Kicks off with US-Iran and Climate Change Crisis