After a mixed start to the day, the FOMC statement helped major US equity benchmarks to close in positive territory.

As widely expected, the Federal Reserve kept interest rates unchanged in a target rate of 1.5% to 1.75%. The comments from the Chairman remain consistent with recent statements from the policymakers. However, the new dot plot shows that a 2020 hike seems unlikely which boosted the equity markets.

In the FX market, major currencies were stronger against the greenback. The US dollar emerged as the weakest currency dragged by the comments from the Fed.

The Antipodeans were among the best performers in a US dollar selling environment. As a commodity currency, the Aussie dollar was also supported by higher iron prices. The AUDUSD pair is trading just below the 0.69 level as the prospects of planned tariffs on December 15 are likely keeping a lid on gains.

The British Pound continues to trade higher buoyed by the strong possibility of a majority win by the Conservative Party. However, the recent polls have shown that the lead between the Tory and Labour party has narrowed and Sterling traders should be careful as any unexpected outcome could send the Pound crashing.

The GBPUSD pair rose above the 1.32 level before retreating slightly to trade in the vicinity of 1.3197

The rally triggered mainly by deeper production cuts continues to provide some support to the oil market. Even though WTI and Brent Crude initially came under selling pressure after the EIA report showed a large build in crude oil inventories, oil prices managed to pare some losses.

As of writing, WTI and Brent Crude are currently in the region of $58 and $63 respectively. On the daily chart, they are both trading in a bullish channel.

Gold was rising incrementally throughout the US session but the XAUUSD rallied in the final trading hours lifted by a weaker US dollar and the Fed’s comments. 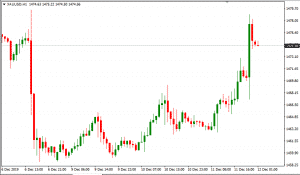