Investors’ attention was mostly on the impeachment process of the US President due to a lack of developments on the trade front and a holiday spirit environment. Even though President Trump is on his way to be the third president to be impeached, the stock market has seemed relatively unfazed by the impeachment proceedings so far. The reason being is that the President can be later acquitted by the Senate. The unity projected among the House Republicans suggests that the likelihood of the Senate convicting the US President is low.

If risk sentiment does take a hit during the impeachment process, we expect the momentum to be short-lived unless there is a significant shift in the expectations that the President will remain in office.

After trading mostly in positive territory, the momentum faltered into the closing bell. Major US equity indices ended mixed on Wednesday: 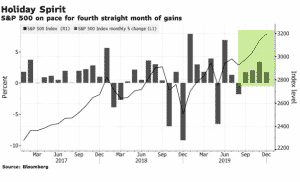 In the FX market, major currencies were mixed against the greenback. Amid a relatively light economic calendar in the US session, the Canadian inflation data was the only major data.

The CPI figures came in line with expectations which provided a modest lift to the Canadian dollar. The commodity currency was among the best performing G10 against the US dollar. 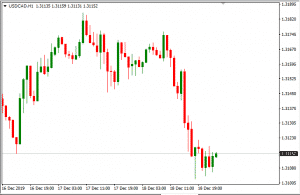 The Pound remains under pressure and was among the weakest performing currency. The Cable fell further to the 1.30 level – a key support level. The next event for the Pound will be the BoE meeting on Thursday.

While it is widely expected that the BoE will keep interest rate and policies unchanged, it will be interesting to see the tone and language of the policymakers following the outcome of the elections. 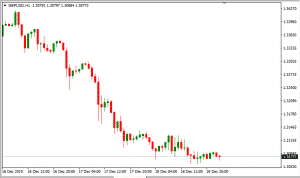 After a bearish API report, oil prices renewed the upside trend following the release of the EIA report.

The report revealed that US crude oil stocks fell by 1.1 million barrels. Although the reading was slightly below expectations, the draw in crude oil inventories helped WTI and Brent Crude to edge higher.

Gold remains directionless – seesawing in a tight range around the $1,475 region as investors stay on hold.