A negative start to the week as sentiment soured in anticipation to the planned December tariffs hike. All US equity benchmarks ended the day in the red:

Investors are digesting the mixed global economic data – strong Nonfarm payrolls from the US was overshadowed by mixed Chinese trade data reviving fears of a global economic slowdown.

In the FX market, major currencies were weaker against the greenback. It was a relatively subdued session on Monday due to a lack of macroeconomic data releases as traders are gearing up for central bank meetings and top-tier data later this week.

The British Pound continues to gain bullish traction as new polls reiterate a majority win by Prime Minister Boris Johnson. The GBPUSD pair retreated slightly after trading in the highest level seen since April. As of writing, the pair is trading in the vicinity of 1.3143. 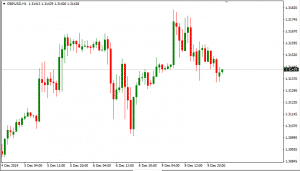 The Antipodeans were amongst the worst-performing currencies dragged by Chinese data. The pair. The Aussie dollar is weaker at 68.20 US cents while the Kiwi is buying at 65.45 US cents.

OPEC+ decision to deepen cuts, speculative bids around Saudi Aramco’s IPO and strong US data have triggered a rally in oil prices last week. However, oil prices struggled to extend gains on Monday.

Investors have received much reassurance on the supply side with the production cuts. However, the recent economic data from China revived concerns of global demand which remains a key economic concern for the oil market.

On the daily chart, WTI and Brent Crude are currently trading in a bullish channel.

Gold struggled to find buyers mainly due to the strong US jobs data. Dismal Chinese trade balance helped the XAUUSD to close in the green on Monday but was not enough to compensate for the heavy losses made last Friday. 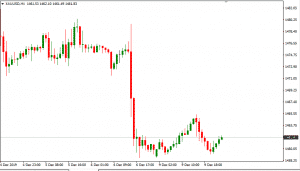