The trade optimism has faded due to a lack of details and events in the UK Parliament are suggesting a hard-Brexit which jointly are keeping investors on edge. Market participants are on hold waiting for the next wave of positive news to push the rally.

In the meantime, the US economic data releases are providing some reassurance on the health of the US economy, which are keeping equities in elevated levels. 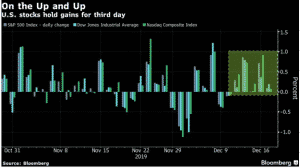 In the FX market, major currencies were weaker against the greenback. The US dollar found support from upbeat manufacturing and housing data:

The recent data are fuelling positive near-term growth prospects for the US.

The AUDUSD pair remains on the back foot on Tuesday. The Doji candle formed on Monday indicated the indecision between bulls and bears and being places at the top of the trend, yesterday’s price action confirmed the reversal.

The next major economic release will be the employment reports. In the meantime, the pair will likely remain driven by sentiment around Brexit and the trade deal, amid a lack of economic events. 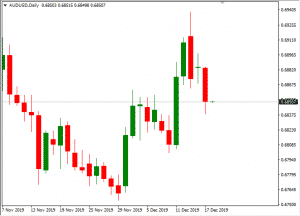 The bombshell has fallen as it appears that the UK Prime Minister intends to make it illegal for the government to extend the Brexit transition period beyond 11 months. The move caused the Pound to erase the significant gains made on the last exit polls during the election period. Mixed UK employment data also contributed to the intense selling pressure.

The GBPUSD pair dropped to 1.31 level on Tuesday and registered its worst daily decline in months. 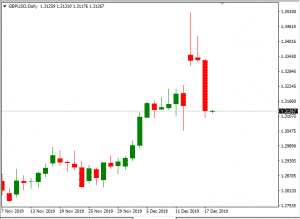 The positive trade news, upbeat data and deeper production cuts are driving the oil rally. As of writing, WTI and Brent Crude are currently in the region of $60 and $64 respectively. On the daily chart, both remain in a bullish channel.

Gold has been trading sideways and is trapped in a cautious rally. The XAUUSD was practically unchanged at $1,475 on Monday.