Last day of the Month

As the year comes to an end, investors have been looking for more concrete developments on the trade front to push global stocks higher. Generally, the stock market tends to perform well in the fourth quarter of the year.

Volatility has remained relatively low in November as investors were quite familiar with the themes driving the markets and the associated risks. Recession fears have also receded as economic data in some instances are indicating that the downturn has bottomed down.

November is gearing up to be one of the best performing months. We saw consecutive record highs in the stock markets:

The rally on Wall Street was mostly driven by trade-related headlines. The news coming from Washington and Beijing have been varied across the month confusing investors of whether the negotiations will result in a partial trade deal.

Even though investors were concerned about the delay in signing Phase One of the trade deal, there was enough optimism to keep market participants upbeat. We saw concession moves from both sides – a notable one will be the US granting a new 90-day licence extension allowing US companies to continue doing business with Huawei.

Trade tensions crawled back into the markets with the signing of the Hong Kong Human Rights and Democracy Act into law. As of writing, the reaction seems limited, but given that the US announced the bill before a public holiday, investors are bracing for a volatile ride for the first week of December.

China has vowed to retaliate with strong opposing measures which are keeping investors on a “wait and hold” mode.

The Australian equity benchmark made consecutive record highs in the last week of the month. As of writing, the index is currently at 6,875 having added 1.3% in the last few days. A combination of rate cur expectations and trade optimism have boosted sentiment for the local shares. Most sectors of the ASX are on track to finish the month in positive territory.

The FOMC minutes was one of the main events on the economic front. After a global wave of easing policies, we note that major central banks are on pause. The FOMC minutes did not reveal anything new other than the Fed is on pause and will only cut interest rates if there is a significant slowdown.

After much speculations around the RBA looking into the unchartered territory of unconventional monetary policy of quantitative easing, the Governor hosed down the prospects of QE anytime soon. In doing so, he fuelled expectations of further rate cuts as the central bank sees QE becoming an option to be considered only when the cash rate would be 0.25% and not before that.

The Aussie dollar tumbled and is currently the worst-performing G10 currencies against the greenback.

In November, Saudi Arabia officially launched the IPO and confirmed that the domestic listing will take place in December. The IPO is geared to be one of the most hyped IPOs of all time.

Initially, the details of the IPO did not meet expectations which temporarily weighed on oil prices. However, despite a domestic listing, a lower valuation and a smaller stake, the IPO will be one of the key determinants of the immediate price action of the oil.

Given the current headwinds in the oil industry, the listing was limited to a local affair as bankers could not convince many international money managers of the merits of the deal and the valuation.

Therefore, the success of the IPO is even more dependent on higher oil prices. Given that the OPEC’s de facto leader is Saudi Arabia and the Saudis might likely push OPEC countries to make deeper oil cuts to keep oil prices higher.

A combination of trade optimism and expectations of deeper oil cut production have supported oil prices. As of writing, WTI and Brent Crude oil are trading higher at $58 and $62 respectively.

The British Pound was primarily driven the election campaign. With most of the major G10 currencies losing at least 1% or more against the US dollar, the Pound was pretty resilient on the back of election polls.

The GBPUSD pair has remained in the elevated levels buoyed by the prospects of a majority win by the Conservative Party. However, we saw the lead between the Tory and Labour Party narrowing adding some downward pressure on the pair.

The pair mostly moved within the 1.29 level. The recent YouGov polls still reiterate a significant Tory lead, however, the pair remained below the 1.30 level due to the political uncertainties. 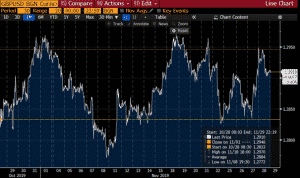 Disclaimer: Articles and videos from GO Markets analysts are based on their independent analysis. Views expressed are of their own and of a ‘general’ nature. Advice (if any) are not based on the reader’s personal objectives, financial situation or needs.  Readers should, therefore, consider how appropriate the advice (if any) is to their objectives, financial situation and needs, before acting on the advice . For more information of trading, check out our cfd trading courses.