After a tight campaign marred by scandals, Justin Trudeau secured another term as Prime Minister. Unlike a clear win in 2015, the Prime Minister did not pass the threshold of 170 seats and will lead a minority government. The governing party will be forced to depend on other parties to pass legislation.

The voting results show deep divisions in the country:

The outcome of the election is unlikely going to drastically change the dynamics in the Canadian markets. On a broader level, there are layers of similarities between the agendas of the different political parties which will help to reduce the uncertainties that generally arises from election results. However, the Liberals governing as a minority government will rely on smaller parties to push legislation which will be challenging.

In the money markets, the Canadian dollar was trading near three-months high against its US counterpart on the Liberals win. The loonie has been on an upswing this year backed mostly by strong economic data and is currently the best performing G10 currencies:

The Canadian economy outperformed its rivals which allowed the Bank of Canada to keep its benchmark interest rate steady at 1.75% while other central banks have cut their own rates in response to the global backdrop.

Employment rose by 54,000 in September driven by gains in full-time work while the unemployment rate declined by 0.2% to 5.5%. The growth was mostly seen in the self-employment and public sector employees.

The Average Hourly Wage Rate year-on-year in September jumped to 4.25% and marked the strongest month in a decade. 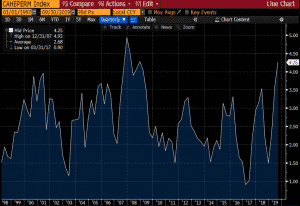 The Wage-common, a wage measure that the Bank of Canada uses to capture the underlying wage pressures reflecting the common trend across data sources rose to 2.7% in the second quarter in 2019. 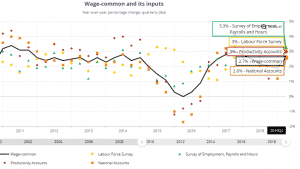 The Bank of Canada aims to keep inflation at the 2% midpoint of an inflation-control target range of 1% to 3%. The recent annual inflation rate stood steady at 1.9% but fell low of market expectations of 2.1%. However, inflation remains close to or on target since March 2019.

The Business Outlook Survey indicator rose to 0.40 which shows a slight improvement in overall sentiment. However, due to the challenges in the energy sector, the sentiment in Prairies remain predominantly negative. 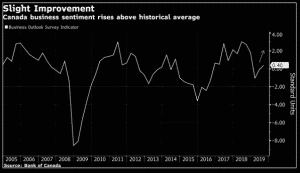 While major central banks have been cutting interest rates, the BoC has been reluctant to do so despite the global downturn because of the sound economic environment. The Canadian dollar has been on the rise and has retained the number 1 spot among the G10 currencies against the US dollar.

After the election, the prospects of growth-boosting fiscal policies combined with a resilient economy may keep the BoC on the sidelines.

Investors are expecting further divergence between the Fed and the BoC. While the BoC is expected to keep its interest rate on hold this year and until late 2020, the Fed is widely expected to cut rates.

In the short-term, we expect the loonie to benefit from the rate divergence and the fiscal boost. In the medium-term, the Canadian dollar may weaken as the effective implementation of the fiscal expansionary policy will lower the Canadian exchange rate.

Disclaimer: Articles and videos from GO Markets analysts are based on their independent analysis. Views expressed are of their own and of a ‘general’ nature. Advice (if any) are not based on the reader’s personal objectives, financial situation or needs.  Readers should, therefore, consider how appropriate the advice (if any) is to their objectives, financial situation and needs, before acting on the advice. See our introduction to forex for more information, including currency trading for beginners here.

Next: Is Germany on the Brink of a Technical Recession?
Previous: Critical Hours for Brexit