Apple announced its financial results for the June quarter after the closing bell on Tuesday. The Company reported revenue of $53.8 billion, which represents a 1% increase from the year-ago quarter.

It is the first time in years that the iPhone revenue ($25.99bn) is less than half of Apple’s total revenue. However, the strength of other Apple products has offset the weakness in the flagship product.

“This was our biggest June quarter ever — driven by all-time record revenue from Services, accelerating growth from Wearables, strong performance from iPad and Mac and significant improvement in iPhone trends,” said Tim Cook, Apple’s CEO.

The iPhone business is struggling as consumers are upgrading less often which is prompting Apple to focus on its consumer services like iCloud, the App Store, Apple Music, Apple Pay for diversification and growth. Wearables like Apple Watch, AirPods, and Beats headphones are also products that are growing at an accelerating rate.

The CEO has the tough job of maintaining interest in Apple into the post-iPhone era. The popularity of iPhones is not the same as it used to be. In the last few years, the company reported its first iPhone sales drop and earlier this year, they issued a rare warning that the first-quarter earnings will be weaker than previously expected.

After reaching its peak in early 2018, its share price had been under pressure throughout 2018. After a strong recovery since the beginning of the year, the stock plunged throughout the month of May. 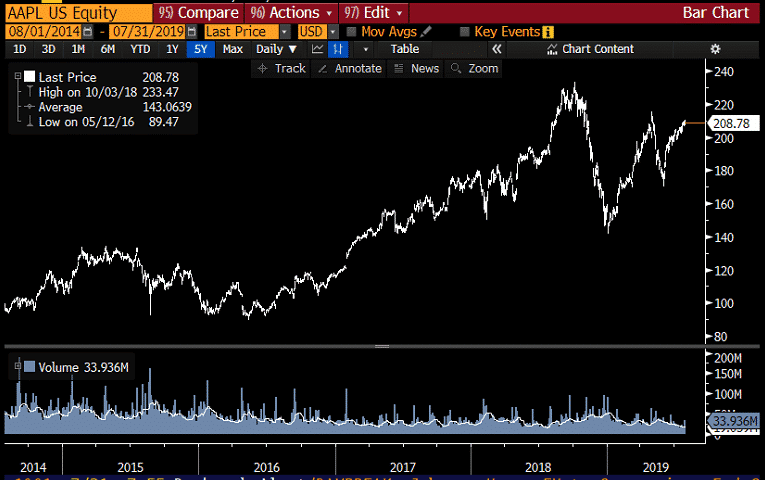 Its share price is close to recouping losses made in May. After the release of the quarterly updates, Apple’s share price rose more than 4% in the after-hours trading.

Apple is providing the following guidance for its fiscal 2019 fourth quarter:

Disclaimer: Articles and videos from GO Markets analysts are based on their independent analysis. Views expressed are of their own and of a ‘general’ nature. Advice (if any) are not based on the reader’s personal objectives, financial situation or needs.  Readers should, therefore, consider how appropriate the advice (if any) is to their objectives, financial situation and needs, before acting on the advice. Click here for more information on trading Share CFDs, also, see our Index Trading page for information in trading Indicies.

Next: US share or option trader: Managing currency risk?
Previous: The “Dovish” or “Hawkish” Rate Cut